The Second Bill of Rights

Early this week – and I mean FUCKIN’ EARLY THIS WEEK – CNBC posted an erratic accounting of how Millennials are ruining everything, again, because they’re just so damn stingy.

No, seriously. that’s even in the headline.

The article, published on Sunday, led with an analysis from multinational investment bank and financial services company Raymond James. The analysis says, without any irony whatsoever, that Millennials are causing the economy to retract because they’re saving more than their Boomer forebears.

Because CNBC writers would rather huff paint on Sundays than dispel generational cliches, the article actually begins like this:

“Millennials — the selfie obsessed, avocado toast-loving generation — might be behind slower economic growth, according to a research note last week from Raymond James”

For those willing to look past the two-minute hate directed at Millennials here, I’ll provide you with a refresher on the company mentioned. Raymond James (the namesake of the stadium played in by the Tampa Bay Bucs (PEACE BE UPON THEM)) is one of those multinational corporations that Adam Smith referred to as the “Economic Masters;” the people at the top who control much of the world’s finances. Because they’re big enough to win the naming rights to (publicly-financed) stadiums, of course there’s some shady shit there. See, in the past two decades, Raymond James has amassed more than $30 million in fines from the Security Exchange Commission and Financial Industry Regulatory Authority. It’s fair to say that the $30 million they ended up paying was a drop in the bucket of what they got away with.

So it’s no wonder that this article, part of a modern feeding-frenzy aimed at Millennials trying to do the best they can with resources that have never been more generationally-limited, is sourced to a company that made billions of dollars investing Boomers’ money. A company that wants to make more money now, but has a case of the Boo-fuckin-Hoos because Millennials would rather save than spend.

But that didn’t stop CNBC from publishing an inflammatory lede against an entire generation. Fuckin hacks, that’s what we call them. 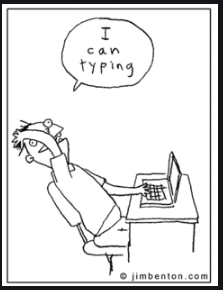 As much as I had hoped to stay disengaged from the particulars of a generational war, I’m now looking forward to entering it on the basis of economics alone. No need for talk about the music these damn kids are listening to, or the way they dress, or that GODDAMN AVOCADO TOAST (okay I’m absolutely touching on all of that, because economics touches EVERYTHING). See, this aggression can not stand, man.

So it’s only natural that since Generations X, Y & Z have been forced to live with less than Boomers – to varying degrees – that they’re going to come into this negotiation pulling for everything else to be on the table.

In essence, “You don’t want to pay us, okay. We’re going to take the following, societally-beneficial policies outta your rich asses.”

Here now, is why the Second Bill of Rights (and the Green New Deal) are going to gain steam. It’s because the banking and finance industries spent decades yelling “COMMUNISM! SOCIALISM!” at everything and anything they could, even when those things didn’t remotely resemble the mentioned boogeymen. It was because since the 1970s, pay has stagnated even as productivity has gone through the roof. 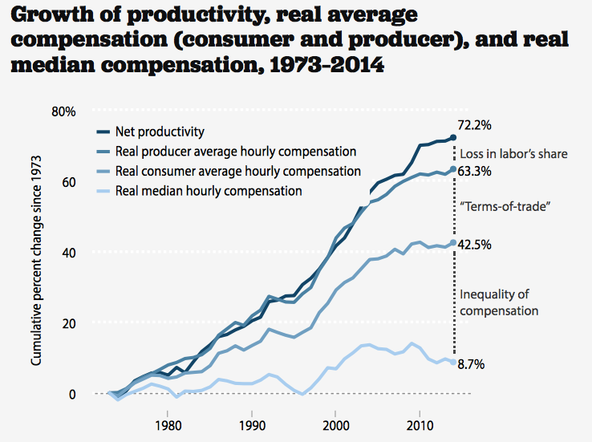 The Economic Policy Institute took it a step further, hopping in the Wayback Machine to the beginning of the Post-World War II order, and the start of era that would create the Baby Boomers.

In the above graphs, you can note that the lines aren’t equal. While there’s a case to be made that they shouldn’t be exactly the same, there is no case to be made (except in Late Stage Capitalism) that wages/compensation should have fallen so far when productivity was up so goddamn high.

See, here’s the deal. If you’re a worker (and chances are ALL OF YOU MOTHERFUCKERS ARE PART OF WORKFORCE, THE LABOR CLASS), then you trade your labor for compensation. You work to create a product or provide a service. Over time, as technology advances and new applications are created from it, certain tasks get made easier, or are even automated away.

That huge distinction in both graphs above happens during a time when more and more technological applications are entering the workforce. It starts with fax machines and copiers, then quickly moves on to personal computers and more. Over time, an incredible wealth of previously-labor intensive tasks is now made easier. Hence, those left in the workforce are more productive.

So if each of those people are producing more goods or offering more (or better quality) service through increased productivity, where did the money go? It certainly didn’t go to the Labor Class, did it?

The Economic Masters hoovered all’a that shit right the fuck up. The Political Masters have made good careers covering for them, too, sacrificing the rest of us upon the Alter of Capitalism where the priests and priestesses of Business & Industry (hallowed be thy name) oversaw the rituals, and provided the absolution.

FDR had already brought the New Deal (and second New Deal) into reality and was about to was about to get down to the business of a sweeping, final effort toward expansion of societal rights called the Second Bill of Rights, but it ultimately didn’t go through.

Killer Fact: That absolutely had to do with the Economic Masters of the time hating – MOTHERFUCKIN’ HATING – the fact that Roosevelt was trying to do right by the People of the United States, which just happened to cut into their profit margins. So, ya know… cries of “COMMUNISMS! SOCIALISMS!” resumed.

The totality of the New Deal policies has been summed up by historians as the Three Rs: Relief, Recovery and Reform. That became operational through things like the Civilian Conservation Corps, Social Security Administration, Farm Security Administration, National Labor Relations Act, and among many other things, rural electrification and slum clearance. These things effectively snuffed out the candles of rural and poor urban America and replaced them with lightbulbs, then moved the country toward an era of equitability (for certain demographics, that is) that paved the way for the later creation of nationwide infrastructural projects like the Interstate Highway System, upgraded ports of entry, hydroelectric dams, and expanded electrical grids.

It’s remarkable what can be done when you stop asking “Who’s going to pay for it?” and instead say “Why aren’t we doing this, now?!”

Roosevelt’s latter efforts – the Second Bill of Rights, would have expanded things to include the rights to medical care, housing, food, clothing, education, employment and leisure, and even freedom from monopolies (something his fifth cousin Teddy would have fuckin LOVED). But again, it didn’t happen, because SOCIALISMS.

Then, Harry Truman and Dwight Eisenhower arrived on-scene in subsequent order, and wanted to do their part by the people. They, too were referred to by the nasty “S-words,” as evidenced by Truman’s quote below.

So, further social progress was stalled, as was an economic progress that could be considered equitable across-the-board.

Remember those graphs from the beginning? The separate graphs from distinct entities that show the same thing? Combine that with the lack of progress we’ve seen, and now you’ll find why the Millennials are stomping for change. Understand that when progress stalled for all the people represented by the bottom of the graphs, it continued for a fraction of individuals at the tippy-fuckin-top. And those individuals amassed more power and authority than ever in human history before.

You’ll understand a bit more if you read through to an Oxfam International report, released at the World Economic Forum in 2018, which stated that a small percentage of the top 1% (so more like 0.0001%, or 1 out of every 1,000,000 people or so) had not only amassed 50% of all the world’s assets by 2017, they’d started taking home 80% of all the gains. Which meant that the rest of the human race – all 99.9999% of the people – had to scratch out a living on the remaining 50% of all assets, and a diminishing share of the gains. Subsequent reporting has showed similar, and terrifying, patterns to this rising inequality.

I’ll put it another way. Rich folks and their advocates like to say that the 1% (which is actually more like the 0.0001%, but that’s hard to visualize, so we’ll stick with 1%) pay 40% of the taxes. You might look at that and go, “BY GOLLY, THAT’S JUST UNFAIR.” And you’d be right, for the wrong reasons. Don’t beat yourself up over it, you’re an uninquisitive, intellectually-incurious person who finds it more comfortable to have a nice warm falsehood laid on your shoulders than be presented by the cold hard truth. See, the real reason it’s unfair is that it’s not enough taxation.

So, 1% has to pay 40% of the taxes, but they also own 50% of the assets and 80% of the wealth gains. Meanwhile, the 99% is on the hook for 60% of the taxes, having to split up the remaining 50% of the assets (which are conveniently also shared while still publicly-owned as government facilities) and have to get ahead, somehow, on just 20% of the wealth gains. Here’s the formula for you to screenshot and share, because modern America loves nothing more than simplicity:

That last part, the simplified version of our vastly-unequal landscape, should make your fuckin’ blood boil.

You’ll understand more now when you look back against the backdrop of our nation’s economic history and see how wide swaths of people were excluded from it, and why, in part, that helped prompt the Civil Rights Movement.

You’ll understand why Occupy Wall Street got stood up (even as it was it’s own worst enemy). You’ll understand that OWS had some overlap with the Tea Party – weirdly enough – because they both advocated for the marriage between the Economic Masters and the Political Masters to come to an end. They just wanted that for different reasons, ‘natch. Protip: the Tea Party was wayyyyyyy wrong. But that involves the dissection of a disinformation campaign for another day.

You’ll understand why when you see the Black Lives Matter movement, and just why the All Lives Matter and Blue Lives Matter responses are just. so. fucking. dense.

You’ll understand why when you see young people such as Mari Copeny, Autumn Peltier, Greta Thunberg (and many more) have ascended to improbable leadership positions in the global climate change awareness movement simply because it was notably void of any adult leadership. The world is on fire, and corporate shills are telling us that $15/hour is too much for entry level work in 2019. Never mind that if the federal minimum wage kept up with inflation, it’d be $11.62, and if adjusted for productivity it would be more than $19.

See, things are fucked on purpose. These things could be fixed before causing widespread issues relating to oppression, disenfranchisement, dispossession, persecution, forced migration and the more-possible-every-day Food Riots of the future. Avocado Toast? Nah, I think I’ll have a Bezos Sandwich, extra Bezos.

So it’s no wonder why Millennials et al are pushing back against the system that created these messes – from Raymond James Financials to the ExxonMobils to the Amazons to the Waltons and the Kochs and all the others who’ve been abusing the system at the direct cost to our present and future.

And it’s no wonder why, if Millennials aren’t able to get paid the same way their parents and grandparents did, that they’re bringing back things like the Second Bill of Rights and the Green New Deal to increase the benefits that society earns from the sweat of its labor. And goddammit if they’re not going to carve it out of the backs of the 1%.

← Facebook Awareness; or, Mark Zuckerberg is an alien in a human suit.
The Cash Grab Principle →