Everyone on Arthas is a shitheel

April 4, 2018 · by publiusminimus · in Pointless, Uncategorized, World of Warcraft · 1 Comment

Today, we break from current events, philosophy, culture and politics to discuss a very important topic:

Arthas is complete shit, as is everything related to the name. Even Gary Oldman knows this.

To expand on that to those of you not involved with things related to the gaming giant Blizzard, Arthas is many things: one-time hero, most-time villain, serious douchebag, heir-to-the-throne, and Heroes of the Storm tank. It’s also the namesake to a wretched hive of scum and villainy server where the mouthbreathers from /r/The_Donald join forces with lifeless 15-year-olds to let loose their incel frustration on the world of the living, through the World of Warcraft. 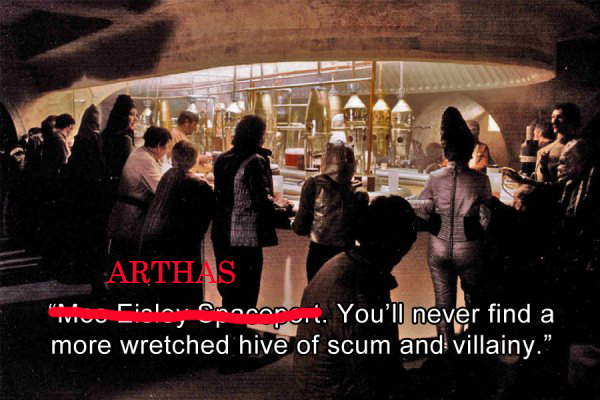 Droid-haters, vampires, wanted criminals and other “people” too nasty to find a home on another server.

In short, it’s just the fucking worst World of Warcraft PVP server in existence. Taking it a step further, Cross Realming allows these animals to interact with otherwise normal individuals, like the smart, witty and good-looking folks from my particular Battlegroup. And no, I will not fucking tell you which Battlegroup that is, except that it contains an “s.”

Regardless, I’m not here to really bang too many letters out today. Since it’s mostly the WoW off-season, since the last real updates dropped and a lot of players are righteously taking a break until Battle for Azeroth drops this fall, it’s just time to blow off some steam and try and figure out exactly how many Mythic+ dungeons are an acceptable way to kill time. Or, getting murdered by the opposition on my ill-fated quest to obliterate PVP gear into Echoes of Battle.

So it just fuckin’ ticks me off when I’m in the middle of a nice, smooth Laphroaig scotch whisky, and some nobody pops out of fuckin’ nowhere to gank me off a flight point.

Yeah yeah yeah… “Don’t play on a PVP server if you can’t handle it…” Well, fuck you, buddy. And you too, guy. And you as well, friendo.

Ganking is wonderful when you’re within five levels. Anything beyond that and you’re just showing the world how miserable your life is.

And it’s always – ALWAYS – some tired ass motherfucker from Arthas. The worst, and I’ve played on Bleeding Hollow and Ragnaros. It takes active dedication to be worse than those two shithouses, and it’s done by off-season practice employed by the no-lifers on Arthas. Not just for the ganking, but the constant gibberish in [Trade] and lackluster attempts at being decent in BGs.

If and when you have the displeasure of running into these scabs, do the digital and physical worlds a favor, and murder their toon immediately.

Okay, next time I talk about WOW I promise to talk about one of three topics: