Standing on the shoulders of midgets

Before any of you go getting all Language Police on me, my first order of business is to take the steam out of you.

Pictured: A random Englishman in something that is not called a “meme.”

Yes, yes, yes. Mr. Fry, your staid opinion is never far from the mark, much unlike your nose to the center of your face. Also, your best work was done with Dr. Gregory House, and get a fucking haircut, you goddamned hippy.

For the record, House, M.D. was a great show, although so incessantly formulaic that the weekly plot structure and resolution could have been used to teach math to special needs students.

Pictured: The four reasons you watched House to begin with. That’s a math joke for all you with special needs.

Regardless, let’s get back to the undeniable furor with which many of you approached the headline. I can say that because I’ve read your emails, which have come with surprising regularity even though I haven’t been running this publishing House of great ideas for special needs kids for too long.

See what I did there, with the words? That’s called a tie-back, and we’ll get to that later.

Also, I pick on Americans because I may or may not be one. Also, that’s where my hits are coming from, according to Internet Statistics. And yes, I see you Lithuania.

The fault is yours because you are ready to be outraged, which is much different than actually being outraged. Ready to be outraged is a state of mind one picks on purpose. There’s an anticipatory state that’s required for it. I would say the state of mind was almost one of premeditation, but that would require Self-Awareness, which has been dropped in favor of the new chic, Self-Righteousness. 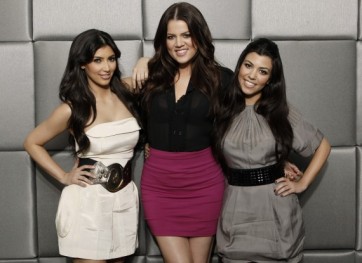 Pictured: Two families who are exactly the same.

The symptom isn’t your outrage, the symptom is your ignorance to the notion that you are allowing yourself to be emotionally hijacked. Your outrage is the product, rooted into existence to generate advertising the network is punctuating the nausea with. That pays the salaries for Phil Robertson and Kim Kardashian to afford whatever lifestyle they’d like to pay for, which is mainstay of The American Dream. That enables them to be placed on pedestals to recite things in public that are meant to generate more outrage, which generates higher ratings, which generates a better position for the network from which it can leverage higher advertising prices. Those advertising prices that are based on your outrage.

Have  you ever noticed that the ridiculous, incredible fucking shit that spews out of their respective mouths happens to do so nearly every time a new season is about to air? You did now.

Outrage begets ratings begets advertising revenue begets million-dollar salaries begets million dollar estates and vacation homes and tax havens in the Bahamas. And you didn’t beget a fucking penny. See what I did there?

You can thank me for filling you in on how much you’re being had, but I don’t expect much in the way of an attaboy, attagirl or attaperson, whichever way you’d like to congratulatorily roll.

And that’s because your attention span, like your outrage, is worth shit.

Regardless, this post is about midgets, at least metaphorically.

You want your outrage to be that of a giant, and to the network executive it might as well be. A sweet, simple-minded, anonymous giant who provides the statistics necessary to charge tens of millions for ad rates and then disperse millions of that as salaries. That sound you hear every time your blood pressure spikes are the cash registers at A&E and E! hitting big.

The cumulative effort is gigantic. A veritable wave spun to Volume Eleven and directed at everything you hate.

The individual effort is miniscule. It might seem like a lot, because after all, they’re your emotions, and your emotions are worth something! Except that they aren’t, ever. They’re probably occasionally worth a domestic argument, or likely worth an Internet “debate” but it’s almost never manifested itself as you being mad enough to get into a public argument over your topic du jour or into you getting into a fistfight over it.

That’s not because you’re a coward, of course. Only other people are cowards. You’re just reserved, a member of civil society, a congregationalist at Our Lady of FuckAll Church, a taxpayer. Fighting is for Muslims, and Drug Users, and poors.

Pictured: People like you who don’t understand anything about taxes.

The argument that your outrage is worth anything is predicated by the notion that you’re getting something for it, but here’s a quick math lesson: Capitalism’s Return on Investment Theory dictates that you should be receiving more than you’re putting in, or at the very least, getting back exactly what you invested.

And all the while, those who are profiting off of your constant production of outrage are standing on the shoulders of … Yeah, you got it.

When nearly the entire entertainment wing of the United States media has geared into the production of semi-nutritious and steroid-filled fodder for your emotional “pleasure,” it’s only a matter of time before half the population is turned into couch dwellers whose only value to society is as a perpetual outrage generation device. The other half claims they don’t watch TV, which is a lie.

Should we have coupled that output with an energy generating device that could power TVs, now that would be something. Far be it from me to just give the U.S. government or Skynet any further ideas to how to enslave the human race, but I figure they’re probably working on that device already.

That same argument up above, that your outrage is worth something, gives off the perception that you should be receiving something for it. As in, you’re a professional outrager. While I do understand that these types of jobs exist in modern society, they’re not actively hiring. Those whose job it is to be professionally outraged get paid well, and there’s just not enough money left over to give to you, you barking fool.

Pictured: Two people who are exactly the same.

What your takeaway on all of this is that while you continue to be outraged over things such as the language I employ, the real thing you should be absolutely insulted by is the notion that you’ve been made into one, to be stood upon by an industry that exists solely to make money off your emotional energy and ground you into it’s own yellow (gold) brick road.

Should you think, first to yourself and then out loud, that the only person to blame is yourself, then you immediately take the step away from that label and into more of a freedom where you learn how to change the fucking channel instead of putting on your feedsack and reclining during the weekly viewing of Keeping up with the Robertsons.

At that moment of your respective freedom those 23-Minute Hates will grow more and more likely to become some thing of the past, at which point your emotional output will be worth something since it’s not all outrage, all the time.

And then the universe may start to listen, but will still not care.